I took these photos of the wonderful creator of such songs as “Jolie Môme” (“Pretty Kid”) and “Avec le Temps” (“As Time Passes”) in 1986 during a concert at the Elysée Montmartre. He was already in the last period of his life as a singer, not the best one (interminable poetic rehashing going on and on like an empty washing machine) but in contrast, his appearance had improved….with passing time! He had the figure of a charismatic prophet, or of an old lion with white flowing mane, his eyes blinking from myopia (he no longer wore glasses), and that space between his two front teeth softened the image of an old man with bald pate crowned by frizzy white hair, gave to him a little hint of eternal youth.
As time passes… 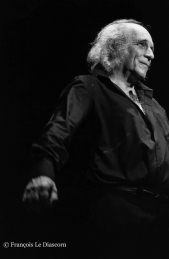 One thought on “Portrait of the week #6 – Léo Ferré”