I met Edouard Boubat upon my joining Rapho in the mid-eighties but we only became close after he met my American wife. Boubat was a great seductor and at that time had his eye on a young American woman recently arrived in Paris and wished to be able to speak with her in her native language. So he would come to our Montmartre apartment for English tea with Nancy and me, or we would go to his apartment in the 7th district of Paris (where I took a number of photos of him including this photo of him with his cat). It was during that period that we exchanged photographs—it’s how I got his famous Leila and the Luxembourg Gardens in the Snow.
He was charming, and he was his own biggest fan—he would often speak admiringly in the third person of his own work, he was in total admiration of it. But in such a naïve way that it was disarming. In fact, he was in love with the beauty of the world—and of course, his photos were a part of that.
But Boubat was a charming butterfly. One day the young American disappeared from his life—and he more or less disappeared from ours about then too. 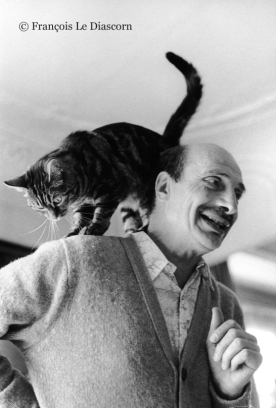 One thought on “Portrait of the week #5 – Edouard Boubat”