This Grand Dame of French literature was prevailed upon by someone in my photo agency Rapho to write a preface for a book of photos by Janine Niépce (also in Rapho). The book was entitled Niépce Duras France to get the full benefit of Duras’s notoriety. There was a big cocktail in Paris for this publishing event and Marguerite Duras made an impressive entrance on the arm of Yann Andrèa, the young man who became her assistant and companion the last 16 years of her life. She was given a seat of honor and sat receiving homage like a queen before her court through-out the evening. Although the place was full of photographers, I seemed to be the only one with a camera (often as a kind of coquetry, photographers would not come to exhibits with their cameras) and so was able to take these portraits of the author of The Lovers. This was around 1992, some four years before her death.

*From July 4 to September 13, 2015, Marguerite Duras Association organized an exhibition of photographs entitled ” A life I wrote ” in tribute to the writer. 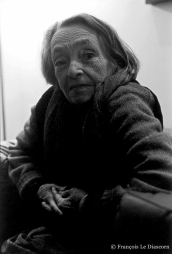 One thought on “Portrait of the week #4 – Marguerite Duras”